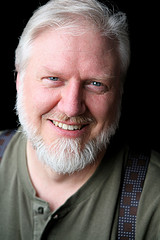 I'm Dale Favier. I was born in 1958. I've been happily married for thirty-five years: we have two grown children.

I worked developing and testing software for twelve years.

Now I work for a terrific non-profit half-time, and do massage on evenings and weekends.

I know most of the constellations visible in the Northern Hemisphere, but not all of them. I stopped because I thought it was a bad idea to have a name for everything in the sky. But still, if you ask me what that bright star or planet up there is, I can probably tell you.

I play solitary, improvisational congas, from time to time.

I practice Buddhism, in the Tibetan tradition. Meaning I meditate. Except when I don't.

I have a shrine on top of my dresser.

I have an M.Phil. in English, which is the degree some institutions give you when you've been a grad student so long that they can't in good conscience send you away with just an M.A.

I wrote half of a dissertation on Old English Poetics, and half of one on Chaucer and Abandoned Women, before I gave up on all that.

I have a B.A. in Computer Science, too.

I qualified as an LMT (Licensed Massage Therapist) ten years ago. Yes, 49 years old is rather late in the day to start a new career. But it's what I've always wanted to do.

For high school I went to a hippie free school, as a boarding student.

In my youth I wrote a couple short novels. They were very bad.

My beard is mixed up white, blond, gray, silver and copper. It's short.

My politics used to be radical. I suppose they still are, but I don't take them very seriously anymore.

I love Oregon, and the city of Portland, passionately.

Being more than a couple hundred miles from the ocean makes me panicky.

I once wanted to be a (literary or visual) Artist, with a capital 'A'. Everything about that desire fills me with loathing now. So I am not very tolerant of Art or Artists (although I love good writing and good pictures.)

When I was quite young I wanted very badly to be an astronaut. Since the career path to being an astronaut was being a military pilot, and I could not stomach much of what military pilots were expected to do, I gave up on the idea. I've borne a grudge against American militarism ever since, on that account.

I love wind and rain and clouds.

I love learning enough of a language to be able to read it, laboriously, with a dictionary. After I get that far I tend to get involved with another language.

I draw pictures on napkins.

By the time I was twelve, I had climbed many of Oregon's mountains (though not Hood or Jefferson), and hiked to the bottom of the Grand Canyon.

I have a personal blog, where I write about all sorts of things. But I'll give you fair warning: some of it's in verse.
Email ThisBlogThis!Share to TwitterShare to FacebookShare to Pinterest
Home
Subscribe to: Posts (Atom)

$100 for in-home massage in the Portland metro area. Relax in your own home! I bring my table to you.